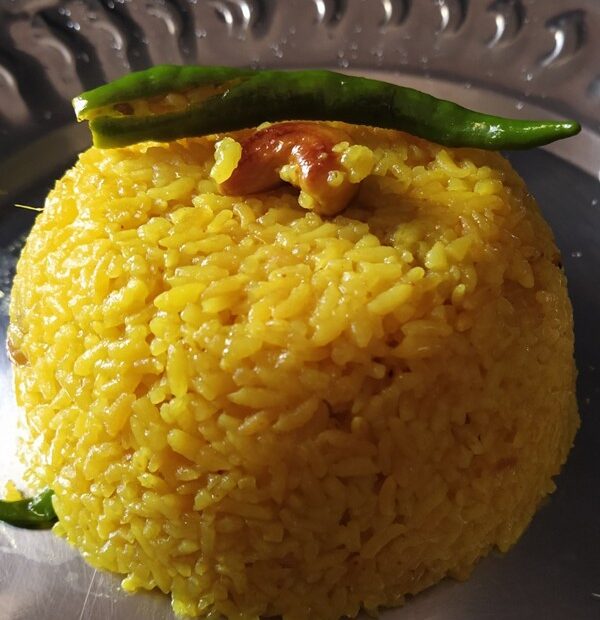 Basanti pulao is a Bengali favorite during festivals.

As you serve, you notice the pleasant and warm yellow color of the pulao.

Very soon a divine and sweet fragrance engulfs you – the aroma from the ghee, gobindobhog rice and toasted cashew nuts transports you to a another world.

As you take the first bite, you relish the subtle yet aromatic flavors of the rice, the ghee and the toasted nuts and raisins.

The pulao is sweet and the spicy side dishes balance the flavors, making for a complete meal.

Basanti Pulao is not a Bengali invention like many other dishes that came to India through the conquerors and got improvised and modified to suit the palette of the local population.

The History of Basanti Pulao

A very famous pulao from the kitchen of Mughals was the Shahjani Zard Pulao. This pulao used generous amounts of saffron.

When the Mughals came to Bengal, the Nawabs at Dhaka (which was capital of Bengal initially) and Murshidabad (the capital of Bengal after Dhaka) took a flair for cooking the pulao using the same technique. With time this pulao became an aspirational dish for the the general population in the region.

Saffron was however expensive and it still is. Turmeric was used instead to get the yellow color. And that is how Basanti Pulao came into existence.

When is Basanti Pulao Traditionally Prepared?

Basanti Pulao is cooked with much fanfare during the Bengali New Year, also called Poila Boisakh. It is served with kawsha mangsho which is goat meat cooked with spices on a slow flame for a long duration.

Many also prepare this dish during Durga Pujo and Saraswati Pujo.

A perfect pulao should –

Side Dishes for Basanti Pulao

Basanti Pulao can be served with both veg and non-veg side dishes. Among the veg, it goes best with Aloo’r Dum (Bengali Dum Aloo). In non-veg, it is traditionally served with a spicy slow cooked Bengali mutton curry, called as kosha (pronounced ‘kawsha’) mangsho.

The above are best options. You can also consider a cauliflower curry and chicken kosha.

Very recently, I had cooked this pulao with chicken kosha cooked in Golbari style and was surprised with the excellent amalgamation of flavours. 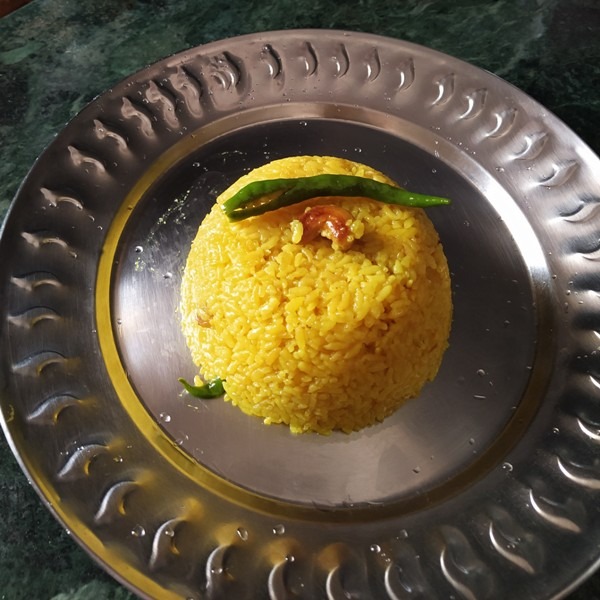 For Marinading the Rice